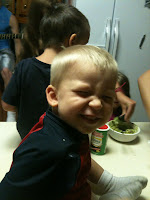 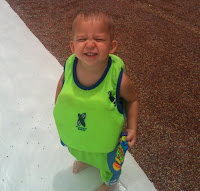 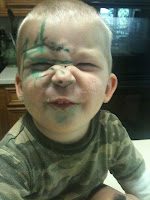 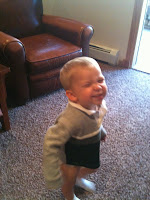 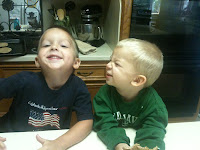 I have a kitchen towel that says, "Enjoy the little things, for one day you may look back and realize they were the big things." I believe this towel knows what it is talking about, so today I want to list some of the little things I love about my two-year-old birthday boy.

I love the way he..
crinkles his nose when he smiles.
looks snugly cute in his footy pajamas.
eats anything I put in front of him.
grabs my ears to pull my face close for a slobbery kiss.
is ready to giggle at any moment.
speaks German.
runs across the room with outstretched arms saying, "ja, ja" when I ask him if he wants to take a nap with Mommie.
sings loudly with the music even though he doesn't know the words.
hates ring tones that bark.
jumps up and down when I ask him if he wants to go walking.
carries the cat around the house.
says, "Momma" just loud enough to wake me out of a deep sleep because he wants to get in our bed.
runs across the house saying, "D a d d y' s h o m e !" when Daddy gets home.
Something funny...
Caden is sleek and fast. His older three-year-old brother, Samuel, is stocky and lumbering. One day Samuel was carefully walking to the kitchen, steadily holding a plate bearing an iced brownie. Each step was deliberate and his eyes were glued to the brownie as if to will it to stay on the plate. Like a flash of lighting appearing from nowhere, Caden flew into the room, swiped Samuel's brownie off his plate, rounded the corner and shoved the whole thing in his mouth before Samuel knew what hit him. After the wails and tears started flowing, Caden came back around the corner to console his brother with chocolate all over his innocent looking face. Samuel did not think the whole scene was anything to laugh about at the time, but he chuckles now. Caden is faster than lighting, like his dad, and has a nose that can smell chocolate from clear across the house, like his mom. Who can blame him?
Posted by Terri on 10/25/2010